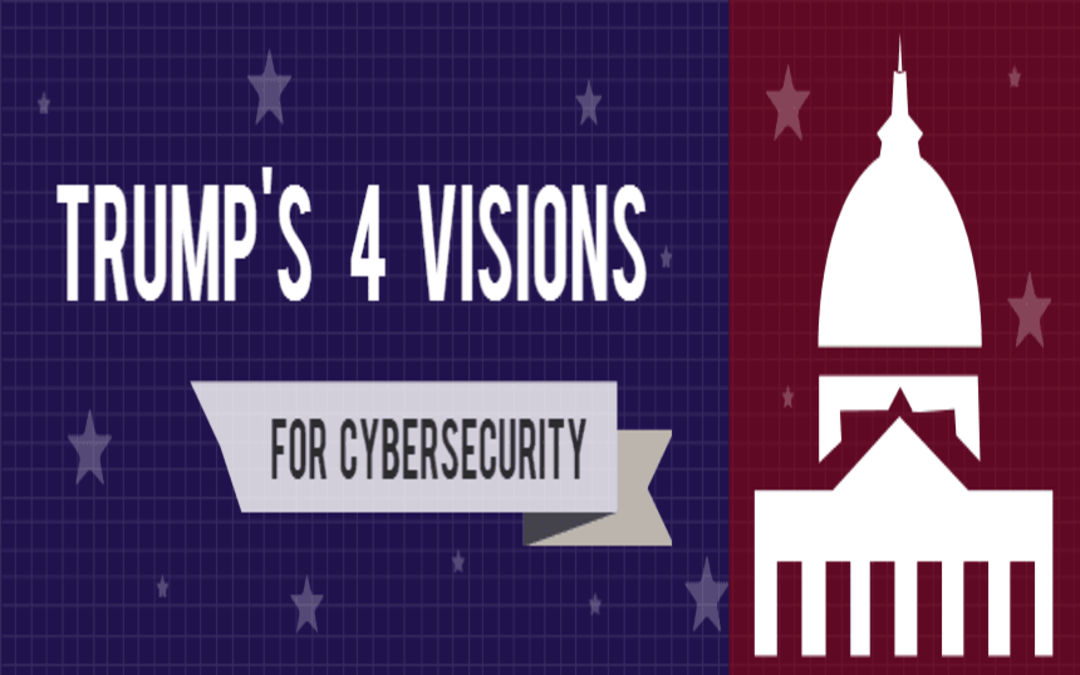 President-elect of the United States, Donald J. Trump, will be inaugurated into office on Friday, January 20th, 2017. In light of this passing of the torch from President Obama to Trump, it’s important to review where Trump stands on cyber security and what his policies and goals may represent. I’ll break down Trump’s four main “visions” for cyber security and their relevance.
Read all of Trump’s Visions on his website here.

Vision 1: “Order an immediate review of all U.S. cyber defenses and vulnerabilities, including critical infrastructure, by a Cyber Review Team of individuals from the military, law enforcement, and the private sector.

Meaning: A specific group of professionals from the military, law enforcement, and private sector will be assembled into a team to review US cyber defences and possible weaknesses. This team will give advice on protection and will put together a mandatory training for government employees.
Relevance: This Cyber Review Team will stay on top of current cyber-attacks while in training US government employees on how to stay safe. The group comes from a wide range of backgrounds and will supposedly help to make sure US cyber defense is the best it can possibly be.

Meaning: Task forces will be sent out to manage the reactions of law enforcement to cyber security threats at a federal, state, and local level.
Relevance: The U.S. Department of Justice (USDoJ) is in charge of Law and Justice within the United States. These efforts to create Joint Task Forces may be a way in which the federal, state, and local law enforcers can all be informed quickly of possible threats and how to respond to them. The intention is to have a cohesive system to react to any cyber threats.

Vision 3: “Order the Secretary of Defense and Chairman of the Joint Chiefs of Staff to provide recommendations for enhancing U.S. Cyber Command, with a focus on both offense and defense in the cyber domain.” (Source)

Meaning: The Secretary of Defense and the Chairman of the Joint Chiefs of Staff advise the president on military matters. Because of the insight these officials hold, President Trump would ask their advice specifically pertaining to cyber security: both in defending and offending.
Relevance: Joint Chiefs of Staff Chairman, General Joseph Dunford, will remain in his position for one year, and the Secretary of Defense will be chosen by President Trump. Since we can only speculation on who Trump will appoint, what we know about General Dunford is more useful. He is not necessarily a tech-guru, but instead a marine who spent most of his time in physical warfare rather than cyber. Even with a lack of technical knowledge, he may be able to provide viable advice regarding strategy rather than the guts of cyber security.

Vision 4: “Develop the offensive cyber capabilities we need to deter attacks by both state and non-state actors and, if necessary, to respond appropriately.” (Source)

Meaning: By using the word “offensive” Trump plans on not only guarding against cyber-attacks, but possibly fighting fire with fire.
Relevance: If it is deemed necessary to “respond appropriately” by someone on Trump’s team, or even Trump himself, cyber warfare could ensue. The real question is whether or not the United States should actively seek out to corrupt and infiltrate other nations through cyber-attacks. Would these actions be justified if someone was attacking them? The Trump administration believes these justifications are all too real in our increasingly tech-savvy world.
Trump’s new plans will aid in the national security of the US, but if you are concerned about your own server security no matter where you are, BitNinja is here to guard against all threats to your system. Check us out and let the ninjas do the work of fighting hackers for you!